“When I met him he instantly locked eyes, gave me kisses and was super friendly." 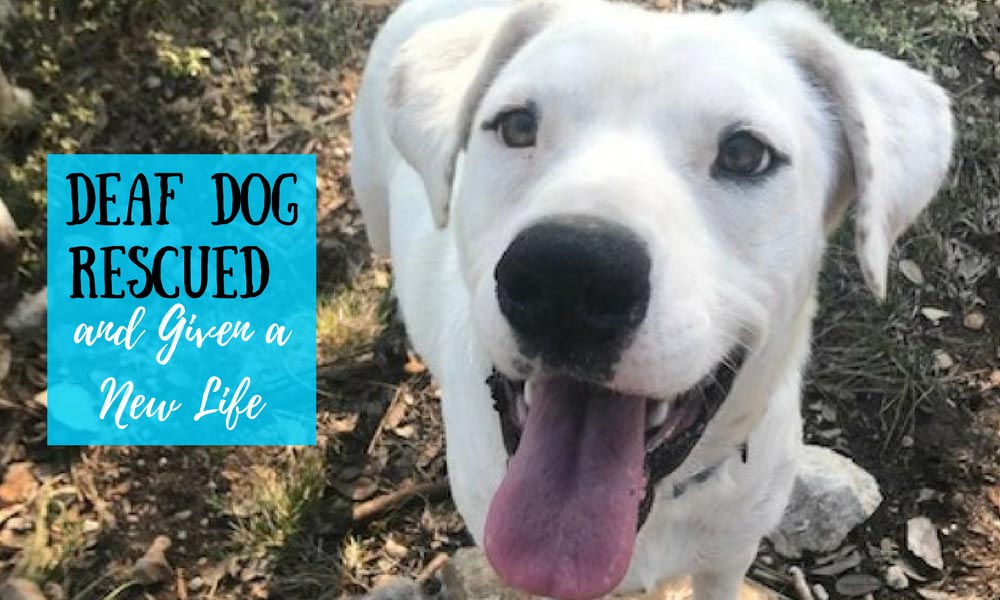 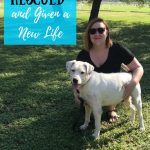 Holly Dean, an animal rescue volunteer, found out about dogs in San Antonio being kept on chains. Especially in Texas weather, Dean knew this had to stop.

When the owners agreed that a rescue could take the dog, Dean went as quickly as she could.

“I was really surprised when I first arrived. The dogs were out all day and night. There was a circle of dirt — you could tell that’s where they walked,” Dean told The Dodo. “They could only go so far because they were chained and walking in circles. Their collars were belts.” 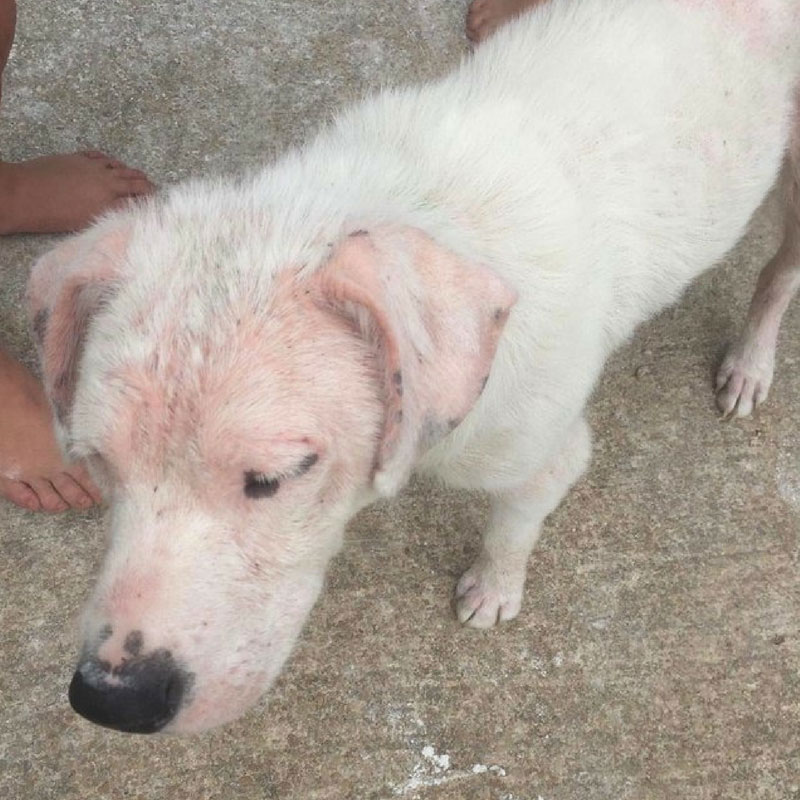 Dean noticed a few things about the white dog while she was wrapping her head around the situation.

“He was missing a lot of fur, and his skin was red and inflamed. Then I learned he was deaf,” Dean said. “I walked over to pet him and he was still such a happy guy, despite the conditions.” 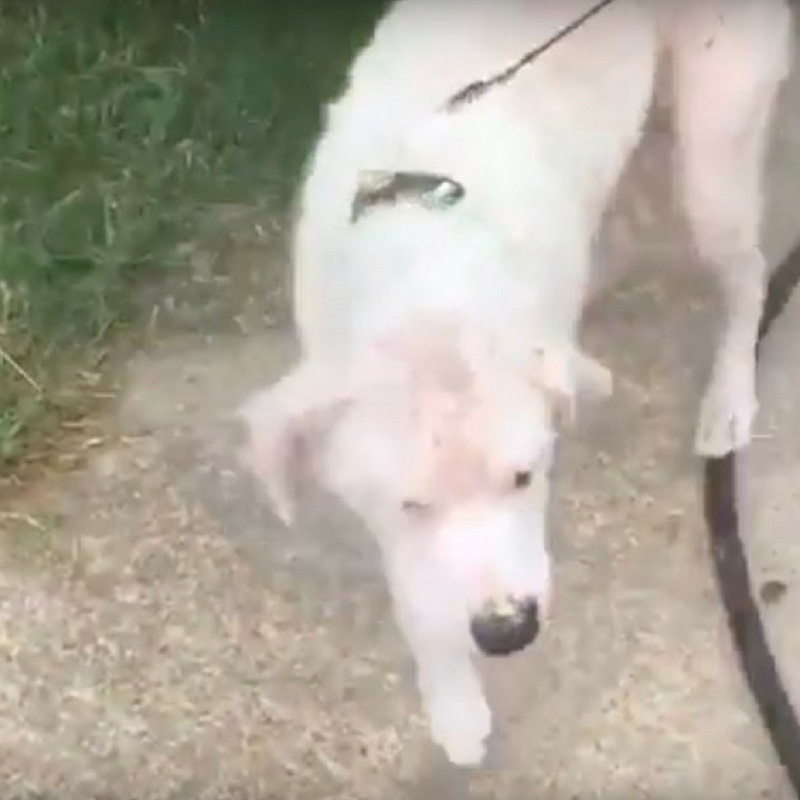 Dean provided the dog with the name Blanco, and took him in the car with the other dogs. Off they went!

Blanco went to the vet for the very first time.

Blanco had mange and a skin infection from flea bites. It made him so itchy he actually chewed the fur off his legs,” Dean said. “He was so sick he had to wait more than a month to be neutered. Surgery would have been too risky.” 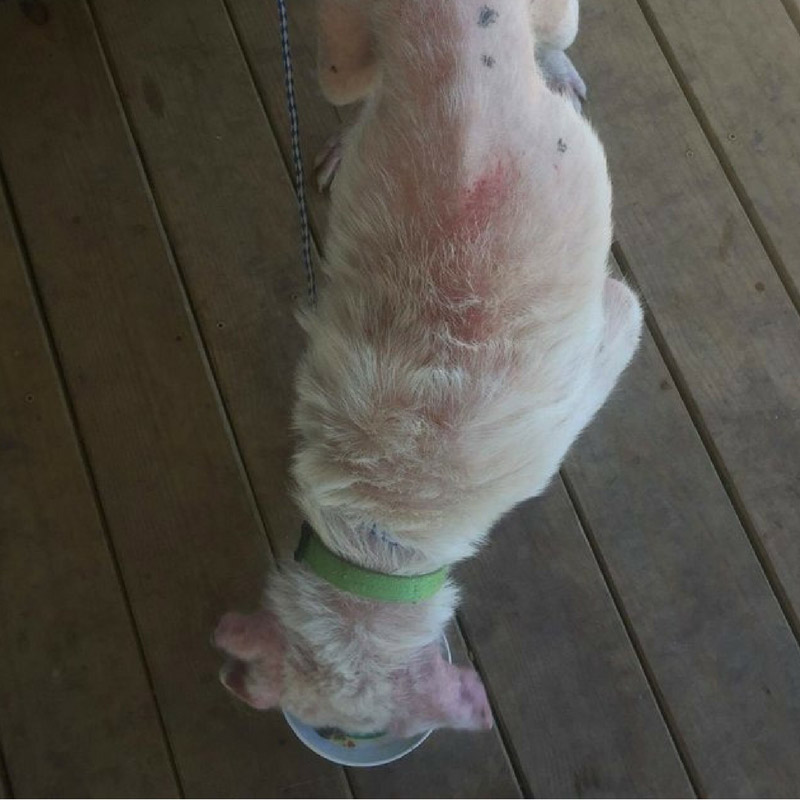 Fortunately, Blanco was strong and ready to get through anything. At only a year old and fifty pounds, Blanco still found joy – always wagging his tail.

As Blanco, the Lab-Dalmation mix, was treated properly, he emerged better than ever! 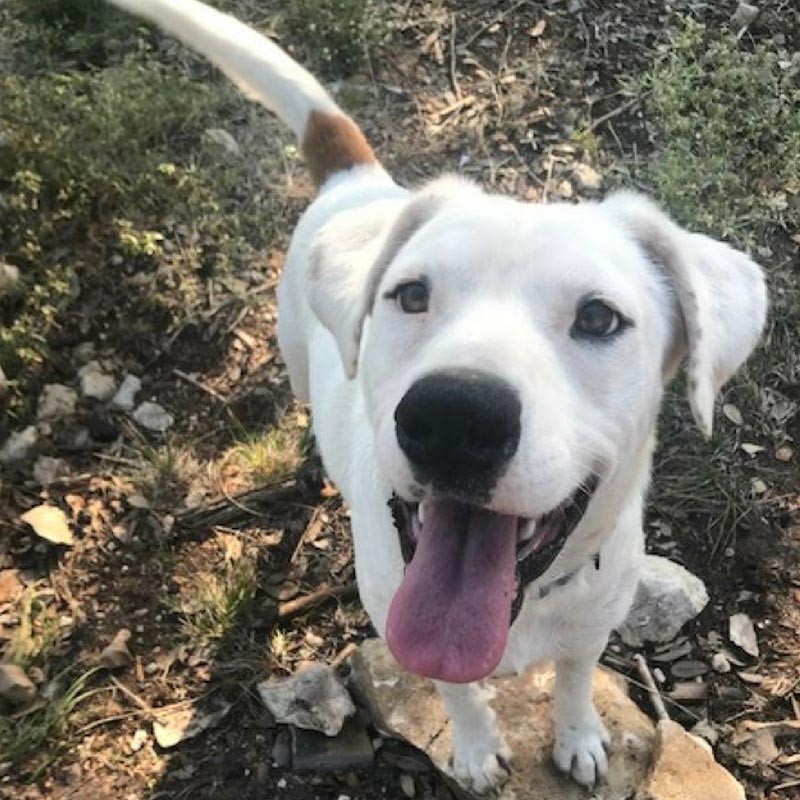 His love is limitless. Even when spending time with cats, Blanco is loving and kind. 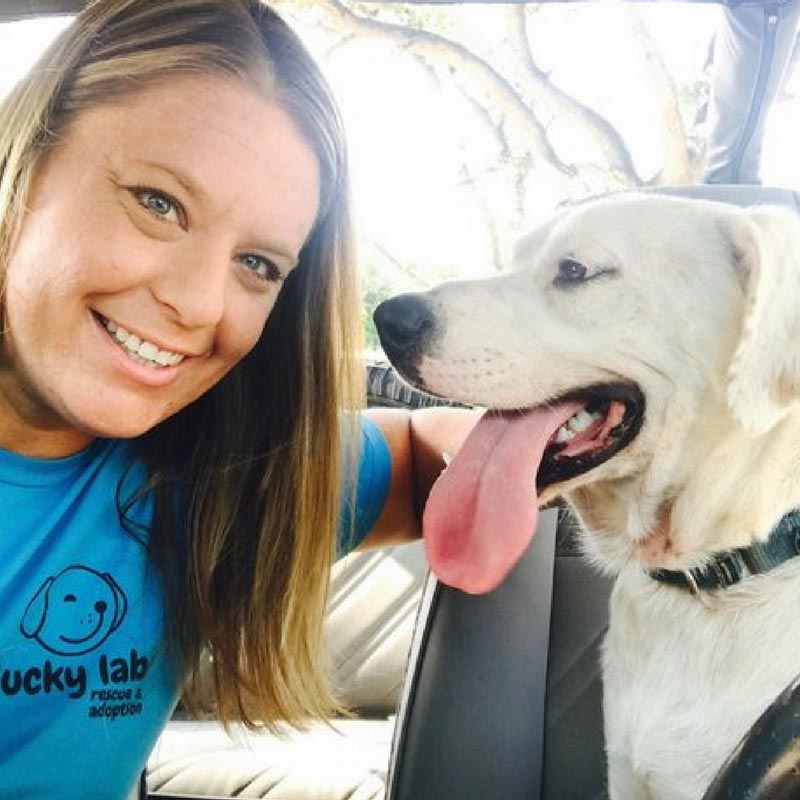 “He has the funniest expressions and head tilt,” Dean said. “Since he’s deaf, I think he is trying to hear me. It’s how he communicates. It’s like he’s trying to listen to me, but he’s thinking, ‘I can’t hear you!’” 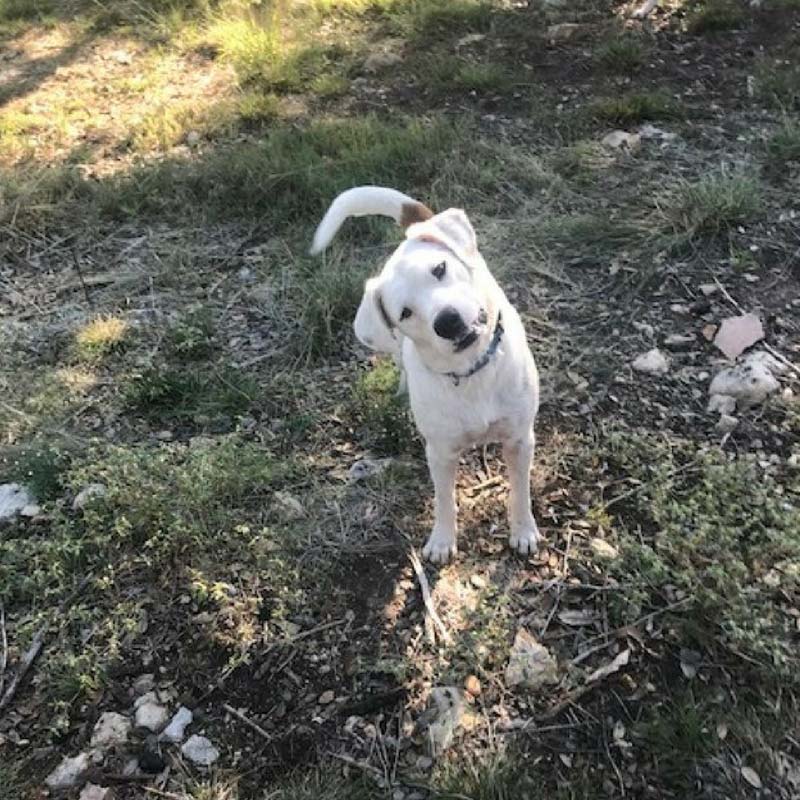 For Dean, rescuing dogs from difficult situations is nothing new! She has volunteered for the Lucky Lab Rescue and also nursed a foster dog named Millie back to health.

Millie and Blanco now play together…and also play with the other eight rescue dogs of Dean’s! 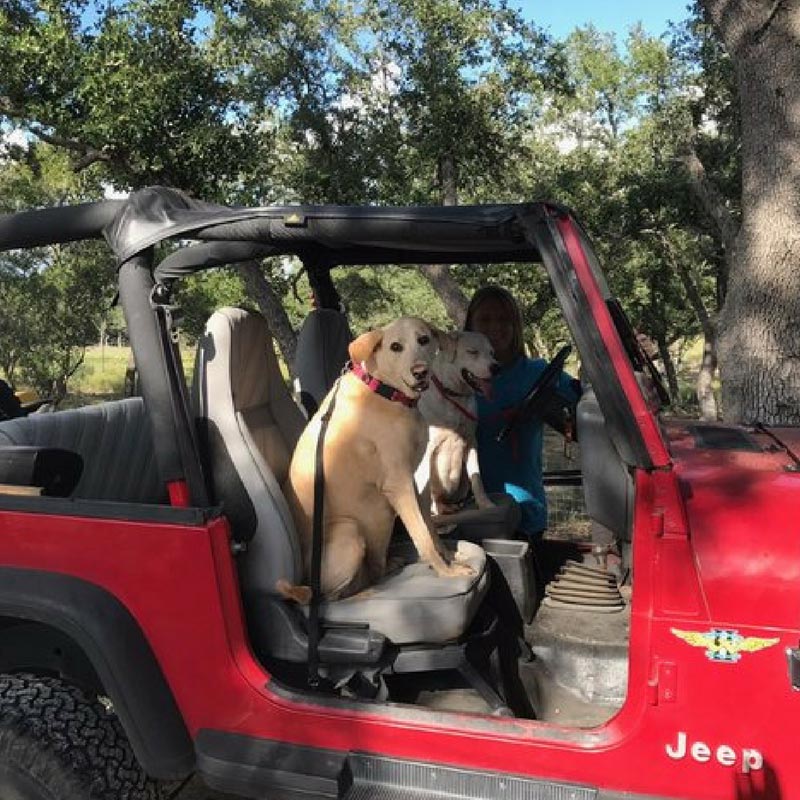 “Usually he’s playing with my other dogs, so if I call them, he will come along too.” 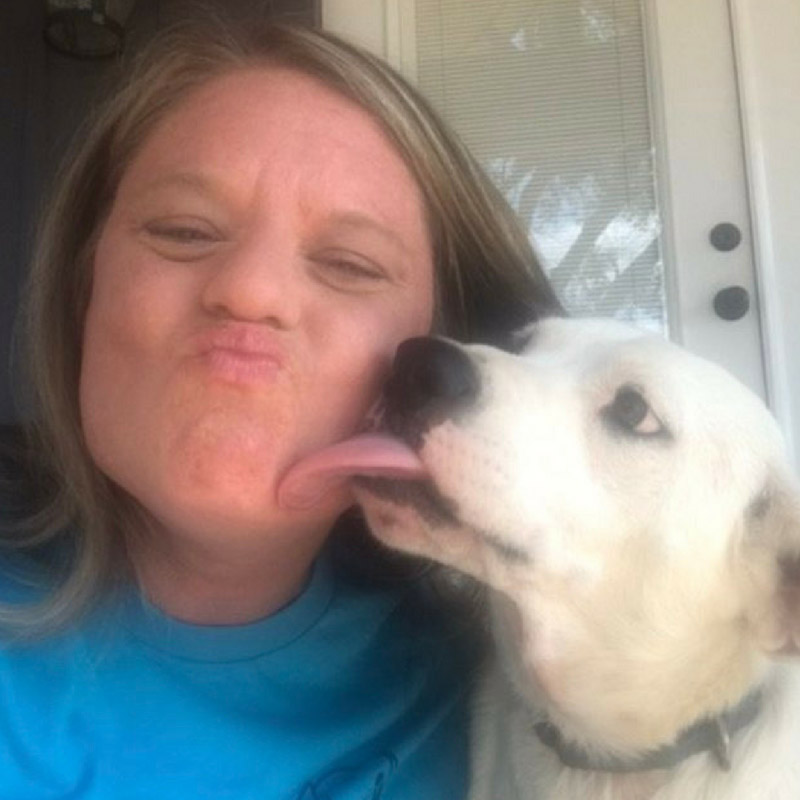 Once Blanco was in good health, Lucky Lab decided to find him a forever home. Very quickly, Sarah St. John came into the picture.

St. John, a resident of Austin, said she fell in love with Blanco the moment she saw him.

“I found him on the rescue’s website. He was so cute,” St. John told The Dodo. “Then I read about him and thought I could give him a good home.”

St. John’s adoption application was approved and Blanco had a new family!

“When I met him he instantly locked eyes, gave me kisses and was super friendly,” St. John said. “He is so sweet.” 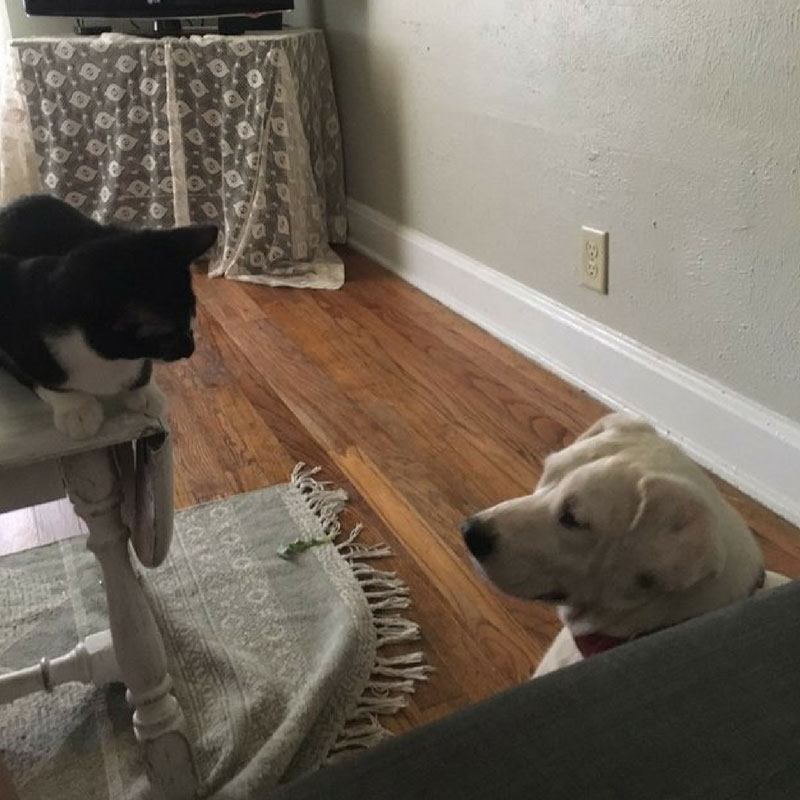 “He loves playing with the neighbor’s dogs,” she said. “Blanco is good with my cat. He is great.”

To help communicate, Blanco is learning sign language commands. So far he knows “sit” and “down”. St. John is working on other skills for him.

“When I first read that he was deaf and communicated using sign language I thought that won’t be a problem, I usually talk using my hands all the time,” St. John said. “He’s a wonderful fit. I love him already.” 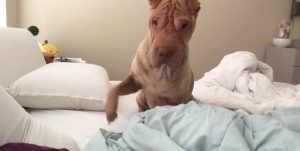 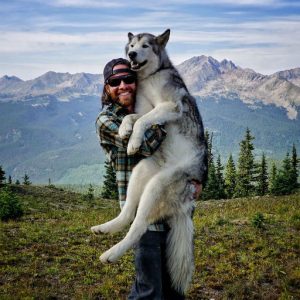 This Dog Was Too Sick To Play With Others, But Wait Until This Donkey Shows Up!