Carlos Carrillo and his colleague were having an ordinary day last Friday, until they stumbled upon something shocking.

The two Shoreline Plumbing employees were on their way to a job in Robstown, Texas. While riding down a country road they noticed something strange in a ditch. Thankfully, they decided to stop and see what it was.

The men quickly noticed it was a dog, tied up with tubing, and with duct-tape sealing his mouth shut.

“We didn’t know he was dog at first,” Carrillo explained to The Dodo. “We reversed and saw him.”

It was clear the person that had left the dog in this state had meant for the dog to die.

“He was very loving and liked the attention. He was probably just there for a day or so.”

Once the two plumbers brought the dog into their vehicle, they drove to Peewee’s Pet Adoption – a local no-kill shelter.

Even after going through such trauma, the dog was thrilled about his rescue.

“Look at that face,” said Carrillo. “He knows he was saved!”

Other than heartworms, the dog was in good health. He will need treatment, but he is very happy that he will live a full life.

“His tail won’t stop wagging,” a team member at the shelter told The Dodo. “He’s such a sweetheart.”

It is unfortunate that the person that left the dog to die will likely never be punished for his/her actions, however it is incredible the two rescuers allowed this dog to have a chance at a full life. Now the dog can find his forever home.

If you ever suspect or witness animal abuse or neglect, contact animal control or 911. You can make a difference! 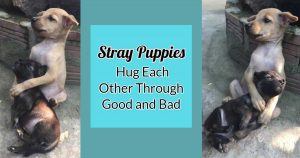 Stray Puppies Hug Each Other Through Good and Bad 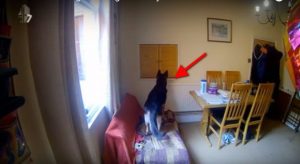 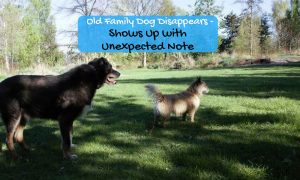