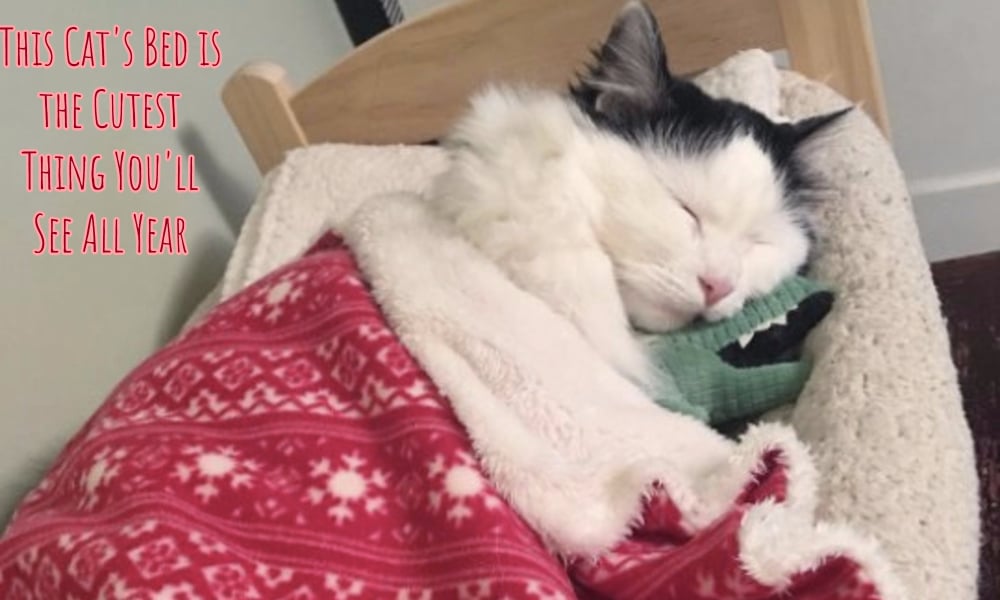 Sophie the cat was rescued when she was 3 years old.

She was found in a hoarding situation with many other animals, all stacked in cages – one on top of the other. Fortunately, Sophie was taken in by the Animal Rescue League of Boston (ARL). In a short time, she was adopted.

Sophie is very loving, and worries about seeing her parents as much as possible. When first adopted, she spent the first few nights sleeping on top of the dresser. She wanted to make sure she was high enough to watch over her parents, and she always knew when it was time to wake up in the morning.

“I tried to see if she would sleep in our bed but she insisted on always sleeping on the dresser,” Sophie’s mom, Christiana Viscusi, told The Dodo. “So after a few nights I cleared off the dresser and put her bed there. She’s been going up to her bed when we go to bed ever since.”

Now, Sophie has a little bed that is a small version of a human bed! She even has her own sheet sets and comforters. Each night, Sophie’s mom tucks her in.

“She sleeps there the entire night all tucked in,” Viscusi said. “She gets up only once around 3 a.m. for a snack, then heads back up to her bed until my alarm goes off in the morning.”

Sophie has an Instagram account that lets everyone see how cute this bedtime process is. Many people think that Sophie’s mom is making Sophie pose for the pictures…

But in reality, Sophie really sleeps cozied up in her bed! She loves being close to her family, and she enjoys being tucked in to her bed just like her parents.

Sophie loves cuddling up inside, but she also loves time outdoors!

“If I even say, ‘Sophie wanna go outside?’ she will come running and sit down to get her harness put on to go outside,” Viscusi told The Dodo. “She could spend hours outside monitoring the yard. When I get home from work she’s waiting at the door and circling me to go outside. We have a routine where we go outside for at least an hour when I get home because I know she’s anxiously been waiting all day.”

Viscusi started taking Sophie for outdoor adventures after a year with the family. During their time outside, a neighbor’s cat began following them everywhere they went.

The neighbor’s cat, Scottie, would watch carefully for weeks. As time went on, he began moving his way closer and closer – until he was finally right at Sophie’s side.

Sophie’s mom came to realize that Scottie was also rescued from a hoarding situation. Sophie and Scottie were adopted around the same time!

“It’s very possible they were at the same place and each put in different shelters, but I really don’t know,” Viscusi said. “Just makes us wonder. Especially because Scottie’s owners said he hasn’t gotten along with any other cats and are shocked at how much he loves being around Sophie.”

While there is no way to know for sure if Scottie and Sophie came from the same place, but they have grown to be best friends. They love spending time together!

“Every time we are outside when he is, he runs right over to hang out,” Viscusi said to The Dodo. “In the summer it’s several times a week. If he sees us on our balcony from his lawn he comes over and cries up at us then goes and sits at our backdoor waiting for us to bring her out. It’s really cute.”

While Sophie may have come from a difficult past, it has not dampened her loving and sweet ways. She is thankful for the life she has now, the bed she has to sleep in, and the friends and family she has by her side.