In a gut-wrenching scene, a Bornean orangutan was recently recorded trying to fight off an excavator from bull-dozing his forest home. 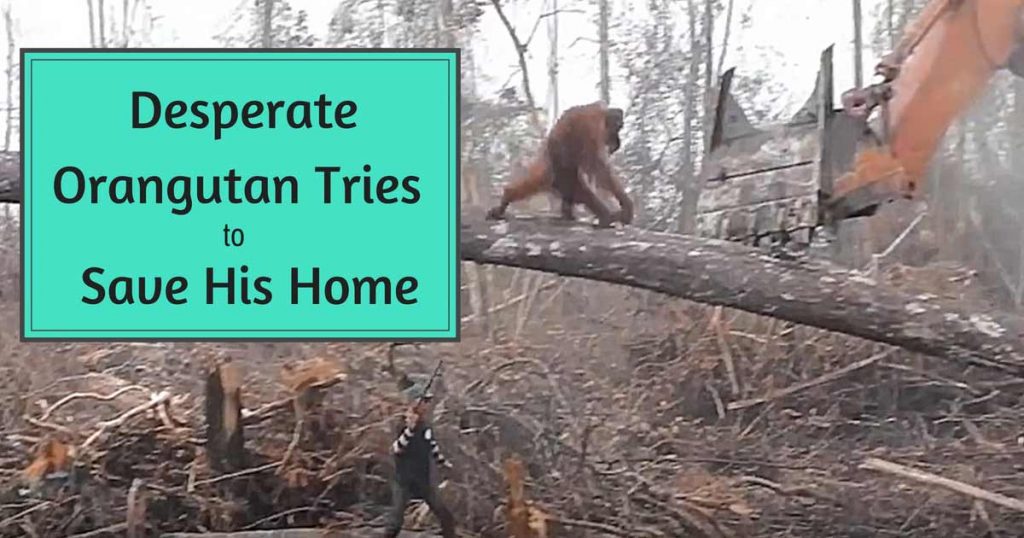 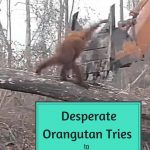 Recently, a construction crew in West Kalimantan, Indonesia, demolished a section of the Sungai Putri Forest, a habitat of the critically endangered Bornean orangutans. Heartbreakingly, one of the orangutans tried to stop the machines from destroying his home by leaping onto a large tree trunk in front of the giant excavator.

The helpless orangutan tried perilously to save the only home he has ever known.

Thankfully, the orangutan’s fate has a happy ending. International Animal Rescue (IAR), a non-profit animal welfare organization was on the ground and was able to save the orangutan. The animal has since been moved to a remote, protected area of the forest.

While we are, of course, glad the innocent orangutan has been relocated to safety, the incident highlights the issue of habitat loss and how humans are at fault. As IAR shared, scenes like this one are becoming more and more frequent in Indonesia. “Deforestation has caused the orangutan population to plummet; habitats are destroyed and orangutans are left to starve and die,” IAR shared on Facebook.

Despite the Sungai Putri Forest being one of the only homes left for the Bornean orangutan, palm oil plantations and other man-made developments are pushing the animals further out of their home and into extinction.

Palm oil is the world’s most popular vegetable oil and is commonly found in popular snacks, ice cream, candy, chips, and other items. Due to the palm oil industry orangutan populations have decreased by 50 percent in just the last ten years due to habitat loss.

According to a recent investigation by Greenpeace International, over 1,000 orangutans are threatened by illegal operations in Indonesia. The illegal logging operations usually take place at night and even in locations when orangutan mothers make their nests.

In a statement, Karmele Llano Sanchez, the program director of IAR in Indonesia said, “Sungai Putri is home to one of the largest populations in the world and we are at a critical point for the Bornean orangutan. Without forests like this, they can’t survive.”

IAR works towards protecting orangutans’ homes, but they can’t do it without you. By making a donation to IAR’s work, you’ll be helping them save the Bornean orangutans from extinction. It’s also important to raise awareness about the harmful palm oil industry, so please inform everyone you know about how palm oil is destroying orangutans’ homes!

WORLD ENVIRONMENT DAYThis dramatic footage shows the devastating impact deforestation is having on precious orangutan habitat. This desperate orangutan is frantically seeking refuge from the destructive power of the bulldozer; a machine that has already decimated everything else around him. Despite all the obstacles thrown at them, our team were able to rescue this orangutan and bring him to safety. Unfortunately, scenes like this are becoming more and more frequent in Indonesia. Deforestation has caused the orangutan population to plummet; habitats are destroyed and orangutans are left to starve and die.We need to ACT NOW. This World Environment Day, plant a tree and help us rebuild and protect precious orangutan habitat. The situation is critical, and we are running out of time. PLANT A TREE TODAY: https://internationalanimalrescue.org/plant-tree?utm_source=Facebook&utm_medium=social&utm_campaign=World_Environment_Day_2018&utm_content=videoPlease share this post far and wide. Thank you.